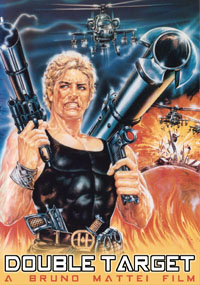 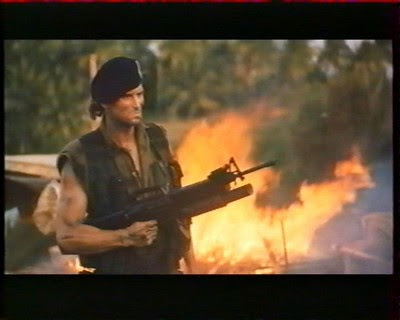 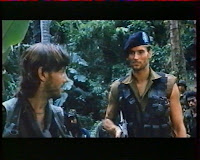 Miles O'Keeffe, known more in this household for his Ator The Flying Eagle films than his time opposite Bo Derek in Tarzan The Ape Man, joins Mattei in the Filipino jungle for one of the more entertaining examples of the "Balls, Guts and Exploding Huts" cycle. The former A-list identity turned B action hero (see his other Filipino-shot films Phantom Raiders and Trigon Fire) is more than just decent as Double Target's interchangeable Rambo clone, sometimes shirtless and alternating between blow-wave and ponytail, but usually with a pocket rocket launcher in tow. A series of terrorist attacks in South East Asia prompts an American senator (Donald Pleasence) to call in former Special Forces man Bob Ross (O'Keeffe) to confirm Russians are training a new breed of terrorists across the Vietnamese border. Ross reluctantly agrees to the suicidal five day mission, if only to take his and his dead wife's estranged son Jan back to America with him. On a trek through VC territory with his Belgian contact Toro (Bruno's regulation actor stuntman/actor “Richard Raymond”/Ottaviano Dell'Acqua), he locates the Russian camp, its commander Colonel Galckin (Bo Svenson) and his second-in-charge, the psychotic Talbukin (Cirio regular David Anderson). He manages to bulldoze his way out - on a motorcycle's sidecar, machine guns blasting and film sped up - and rescues his son from the evil clutches of Galckin, but the way back proves even more difficult, and time is running out. Ross' former commander Colonel Waters (Mike Monty) pleads with the Senator to bring him back alive; his other contact, a sympathetic old geezer named McDouglas (“Alan Collins”/Luciano Pigozzi) is also pulped by the VC and his daughter Mary (Swedish actress "Kristine"/Kristen Erlandson) joins Ross and Jan in their desperate bid for freedom, though prompting Jan to believe (quite rightly, too) that everyone ends up dying around Ross, and thus testing the "I love you Dad" theory by pointing a pistol at his head. 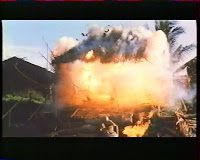 Double Target, being such a cheerful, overwhelmingly likeable dumb action film, allows for an overabundance of the quintessential "Bruno Moments" - Ross literally punching his way out of a Vietnamese embassy, for instance, or a hungry shark upending (and eating!) a VC patrol dinghy. For Mattei and writer Claudio Fragasso, each line of dialogue is punctuated with explosions, and each scene is lit with rocket flares or blasting bamboo huts. Guard tower in your way? BOOM! Enemy chopper behind you? BOOM! Trapped in a minefield with the Russian army? BOOM! BOOM! BOOM! Rough and ready live sound (rare for a usually dubbed Italian production in the Philippines) captures every moment of Donald Pleasence - his character's name, appropriately, is Senator Blaster - in his eccentric wheezing, inhaler-huffing, emphysema-inducing performance; Bruno's other stand-by guy “Alex McBride”/Massimo Vanni, his beard making him the spitting image of Chuck Norris, plays one of Galckin's henchmen, and Juliet Lee, also in Bruno's Strike Commando as a VC torturer, plays one of Mary's friends, and when the Russians turn up at the house Ross and co are hiding in, turns out pretty handy with an M16. With three films down and umpteen to go, this could be Bruno's crowning Filipino achievement, but as ever with Mattei, it's an unpredictable minefield we're walking through…