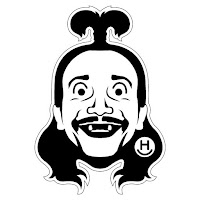 Elvis And James (dir. Tony Y. Reyes, 1989) takes on Fifties music icons via Eighties high school comedies, with Joey de Leon playing Elvis Presto with stick-on Brillo sideburns and Rene Requiestas as the almost Dean-alike James Ducuycoy, two delusional thirty-something delinquents in leather jackets and Brylcream smoking, preening and mocking their way through some classic rock'n'roll evergreens. Whether on a beach or in the cold in Baguio, the two don't seem to fit anywhere, but still manage to woo their girls, Long Tall Sally and Marilyn Monroy, via a recreation of the competition in Dirty Dancing - this time with Rene sniffing armpits and dry-humping his companion's leg. To demonstrate just how self-referential Regal's series had become, dwarf sidekick Noel "Ungga" Ayala appears as a diminutive customer in a music shop called Sek's Organs. First he complains loudly that he can't reach a paino's keyboard, then turns to Joey de Leon and complains about his disappointing rate of pay for acting in Starzan! 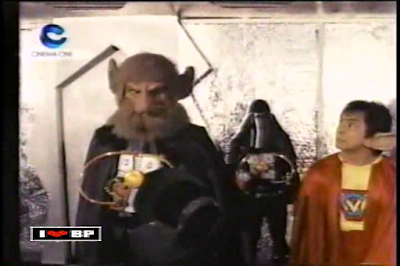 SuperMouse And The Robo-Rats (dir. Tony Y. Reyes, 1989) Orphaned baby is left at a fair and grows into a carnival barker (Joey de Leon) who transforms via a magic amulet into a mouse-eared, whiskered superhero and saves his carnie friends from Paquito Diaz's goons, bank robbers, and a spaceship full of Robo-Rats. Gap-toothed Rene Requiestas is at his best playing hapless Doro the Magician, and Joey and Rene's bug-eyed dwarf sidekick from Starzan (Noel “Ungga” Ayala) performs a karaoke love song FROM HELL. The best bit, however, is the Star Wars moment when the lead Robo-Rat (a furry and bewhiskered Ruel Vernal) takes off his Darth Vader helmet and announces to Joey in a helium voice "I am your father…"! With Manilyn Reynes, Carmina Villaroel and Lucita Soriano. 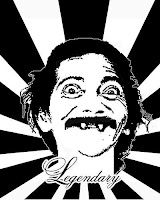 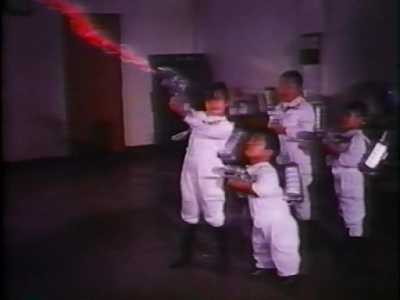 Goosebusters (onscreen title Mumu? Anong Malay Ko!/"Monster? What Do I Know!" dir. Tony Y. Reyes, 1991) Comedian/co-writer Joey de Leon and director Reyes continue their winning streak of Hollywood lampoons, this time Ghost AND Ghostbusters, and with a sideswipe at Silence Of The Lambs! Joey plays Patrick Sisi, a gallery owner falling in love with striking Demi Amore, aka Angel (Racel Tuazon), while accidentally eating the favourite pet goose of his neighbourhood serial killer (called "Father", apparently, judging from his knuckle tatts). With his bug-eyed, magnificently mulletted dwarf sidekick Charlie Sheng (Noel "Ungga" Ayala), he attempts to contact Father's first victim, but batty clairvoyant Groovy Goldberg - Whoopi she ain't! - instead conjures up the ghost of Mahal the Goose and it enters Angel's body, leaving her a honking simpleton to the horror of her father (Panchito). Meanwhile Ungga and the next door kids don the Goosebuster overalls and ecto-backpacks to battle a twenty-foot goose skeleton spitting laser beams from its eye sockets. Huh? As truly insane as it sounds, with regulation musical numbers (The Sound Of Music's "Do Re Mi" is now a ditty about cooking seafood), and a disturbing level of dwarf abuse, in which Ungga is kicked, beaten, slapped, caught in a sun roof and thrown upside down against a chair, all in the name of Comedy Gold.