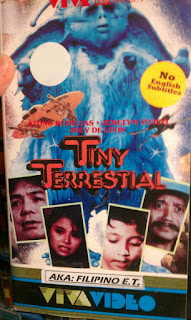 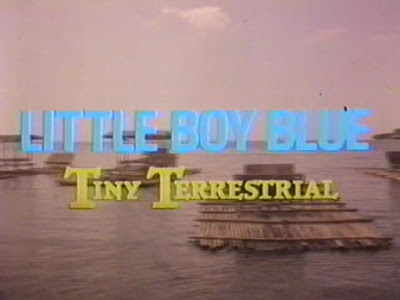 
We here at Schlock Treatment like to dig deep. Deeeeeep. So when Little Boy Blue suddenly appeared on the radar out of nowhere, believe me it’s an obscure one: a childish Catholic-laced E.T. ripoff from the Philippines, featuring a large blueberry that’s been molested by a Teletubby. Painful, infuriating, and at times like trying to stop a runaway bus with your teeth, it is nevertheless lovably dumb and, as far as lovably dumb Pinoy parodies go, one of the dumbest. 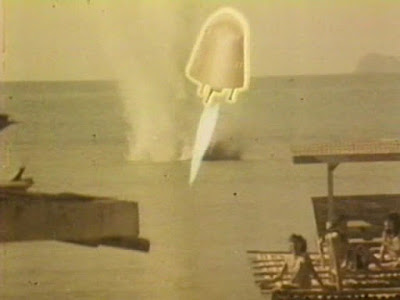 A squat stopper-shaped spaceship is spotted over Batangas, practically over the heads of three pre-teen cousins living in a simple nearby barrio. After their extended prayers – this is a devout Catholic family, you’ll need to remember - the kids beg their grandmother Panchang to tell stories of aliens – unbeknownst to them, at the same time the strange craft lands in the jungle. Aliens, says Panchang, descend from the heavens to punish the wicked. Just like Jesus, or, come to think of it, like Santa Claus. Back in the jungle the spaceship opens and out bounces a round rubber blue thing covered in squid suckers, and it takes refuge in the kids’ barn. The two young boys, Ato and the twitchy Empoy, are woken by strange sounds and uncover the creature scoffing the family corn. And what a creature it is: a head somewhere between a Gremlin and bloated Yoda atop a furry scrotum and Big Bird feet. And blue: all fluro blue, and emitting sounds like a mid-butchered veal (“Nyip! Nyip! Nyip!”). They argue over what to call it. “Do you remember the film ‘Extra Terrestrial?’” asks Ato. Tiny Terrestrial, they agree, or TT for short. “You’re just jealous,” they yell at their female cousin Neneng, the Drew Barrymore of this bizarre parallel universe, “that we have a TT [“titi” being Tagalog slang for penis] and you don’t.” They also settle on Little Boy Blue, and Neneng bonds with the gentle creature by pressing her finger lightly against TT’s rubber prong. It’s a touching scene in more ways than one, aiming for the emotion of Spielberg’s original but marred somewhat by TT’s high pitched bleating. 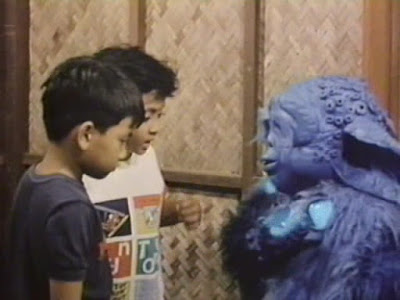 Of course you can’t have an ET clone without the meddling adult scientists, and at alien research group PAGNANASA’s headquarters, pretty young scientist Dr Delgado (and by young, I mean seventeen or eighteen) runs TT’s craft through a battery of tests. She believes the ship has emerged from inner space, not outer, and may be a relic from the lost city of Atlantis, thus proving the ranting renegade Dr Galileo’s theories correct. In Little Boy Blue there’s much discussion about Plato, and how the destruction of Atlantis is comparable to the fall of Sodom and Gomorrah. Huh? Don’t worry, it makes more sense soon… Dr Delgado’s limp-wristed boss Zarate orders her to head a team to capture the alien and perform further experiments. Her final analysis: TT is “gentle and very easy to love”. In another section of the scientific community the insane Galileo pays a goon squad headed by “Crocodile” Danding to kidnap Little Boy Blue and show the world just how sane he really is. Try to find the creature, however – TT spends much of his Earth time running around the village draped in a sheet or at the nearsighted Grandma Panchang’s house learning how Jesus is “God to all peoples”. Before you can say “Hail Mary” he’s kissing rosary beads and crossing himself, and in the film’s most uncomfortable moment, has a religious epiphany whilst comparing his own suffering to a wooden Jesus on a crucifix. You can imagine when he returns triumphantly to his home planet, like a round blue Conquistador, there are going to be conversions a-plenty. 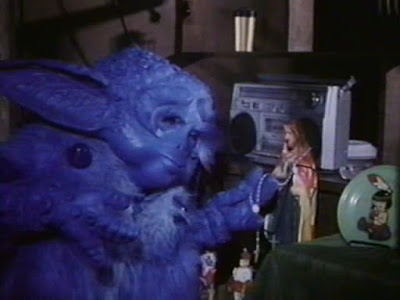 A lame-duck Sunday School pantomime, or a Spielberg spoof that landed eight years too late? I’m having money each way. For all its inherent absurdity and ecumenical leanings, Little Boy Blue is a feeble-minded effort, a throwaway project clearly written on the hoof by the team who brought you the (ahem) superior Alyas Batman En Robin. I’d say it’s an easy bet that Joey de Leon and Tony Reyes don’t even remember flipping this cheap quickie off; at the time, writer/director Reyes and comedian Joey were the busiest creative unit in Filipino comedy, clocking in at around ten features each per year, and considered the top box office draw of 1989. Not everything they touch turned to gold, however, but they certainly give it the old Quezon City try, and for marquee value Joey phones in a cameo as PAGNANASA’s Professor Presto (he’s been peering at Venus – not the planet but his new secretary, fnyar fnyar). The usual suspects are rounded up and given their regulation two minutes of screen time: toothless and heartbroken Rene Requiestas is a barrio bum named Stallone who sees little blue monsters even before his first sip of Tanduay, and TVJ’s regular sidekick Richie D’Horsie strums a tasteful song about dying of cancer.

The film’s major flaws are its leaden pacing courtesy of director Eddie Reyes (son? Brother? Of Tony), its sledgehammer morality, and discomforting attempts at toilet humour aimed at an older demographic than its intended audience of under-tens. None of this is meant as harsh criticism, of course, and the gaping wounds are an essential part of its charm. When I use words like “unbearable”, I mean it with a father’s love for his hopelessly naïve and sugar-addicted infant. For me, I don’t know who’s more unbearable, and I love them equally and unconditionally – the child actor playing Empoy (another of the ubiquitous Reyes, this time Jay-Are), who delivers every line like he’s sleepwalking and trying to create static electricity by brushing both ears, or TT himself, the nyipping testicle betraying not a single emotion from under its rubber mat. His one discernable word – “Bye!” – comes not a moment too soon, and I for one wish Little Boy Blue so long, bon voyage, and thanks for the screaming. 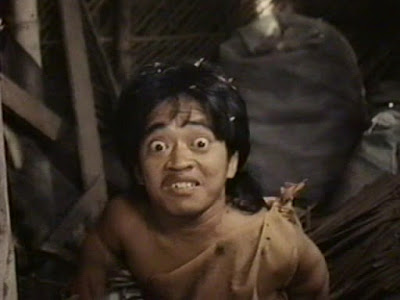