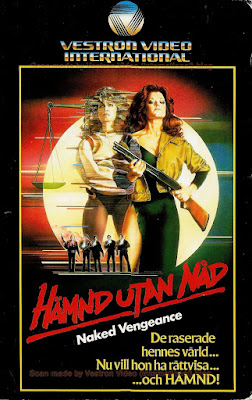 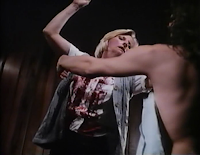 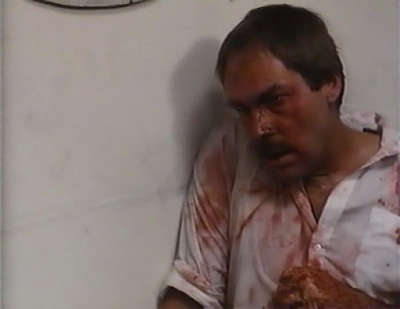 Deborah (Dallas) Tranelli plays Carla Harris, former actress and now rich housewife forced to witnesses her husband's brutal murder by a gun-wielding psycho. She flees to her parents' home amongst the pine tree-lined Californian hills of Silver Lake (actually Baguio, north of Manila!), only to become the object of her former home town's envy and lust. Having caught the unwanted sexual attentions of a repellent, utterly convincing pack of sociopaths, she is raped repeatedly, her parents are shot, and she is left for dead in a catatonic trance, only to snap into vengeance mode and track down each of her attackers ("Drown, bastard!") in satisfyingly gruesome ways. 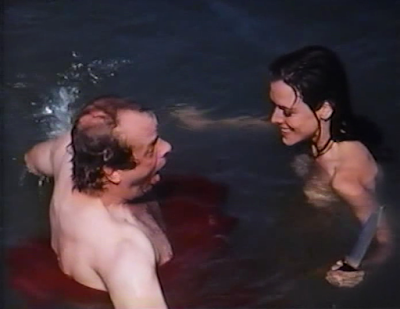 Equal parts I Spit On Your Grave and Ms .45, Naked Vengeance is exploitation cinema in the purest sense of the term, an intriguing and superbly paced riff on the familiar rape-revenge scenario, and arguably Santiago's finest work from the Eighties, with effective performances from his regulars: Nick Nicholson as rapist mechanic Sparky and a suave Don Gordon Bell playing ice worker (and soon-to-be ice cube) Arnie are in top form, as is David Light, the barkeep transformed by Carla into a human flambee. Joining the familiar faces are Henry Strzalkowski as a deputy, Joe Zucchero (with toupee) as Carla's befuddled doctor, and an uncredited Nigel Hogge as an investigator and Steve Rogers as a State Trooper. Carla's blood-drenched butcher shop duel with lead rapist Fletch (Final Mission's Kaz Garas) can be seen in its entirety in the unrated US version boasting 20 minutes more footage than the R-rated version sold to the rest of the world, along with the controversial in which Burke (Ed Crick) has his balls cut off and his body hooked to a moving speedboat - economically splicing I Spit On Your Grave's bathtub castration and boat scenes - and a harrowing rape montage that recalls Straw Dogs' grotesque carnival atmosphere rather than the documentary realism of I Spit… Cirio's best? Certainly with the three collaborations between Santiago and West Indian producer and writer Anthony Maharaj (see also Final Mission and the loopy Future Hunters), they scored a solid three out of three. Essential.