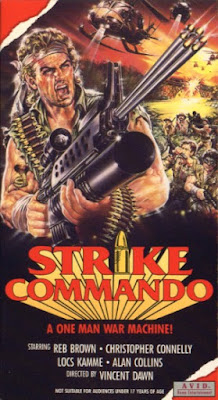 [Italian production shot in the Philippines] 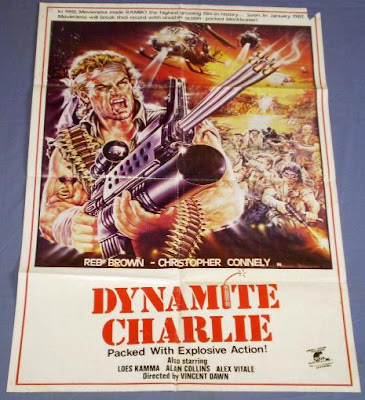 First of Italian director Mattei and writer/AD Claudio Fragasso's premier batch of basic, workman-like, charming and utterly entertaining knockoffs of much better made knockoffs, shot around the former Apocalypse Now sets in Pagsanjan, and featuring Reb Brown as a typically shirtless, bemuscled Spaghetti Rambo named Ransom, an American commando left for dead behind North Vietnamese lines by the snake-like Colonel Radek (Christopher Connelly, also in Ruggero Deodato's Filipino-shot Raiders Of Atlantis [1983]) and rescued by sympathetic villagers in a former French mission under the frazzled alcoholic Le Duc (Antonio Margheriti's favoured "old man" character actor Alan Collins, aka Luciano Pigozzi). Once rescued, he implores Radek and his former commando leader Major Harriman (Mike Monty) to send him back behind enemy lines to confirm rumours of two Russians helping the VC, in return for liberating the villagers. Instead Ransom finds his friends, including a young woman and boy, massacred, and is captured by the bald Russian giant Jakoda (The Bronx Executioner's Alex Vitale) and beautiful cohort Olga (underused Italian starlet “Loes Kamma”/Louise Kamsteeg), who intend to break his spirit and exploit his "war machine" reputation in their propaganda war against the West - he's strung up, beaten with poles, burnt with oil lamps, and trapped with the fly-covered corpse of his former cellmate, American POW Boomer (David Brass). Naturally a VC camp can't hold Ransom and he breaks out in a flurry of exploding huts and machine gun blasts before facing off against Jakoda in what I call the film's "Bruno Moment", the jaw-unhinging tangent present in every Mattei knockoff, and in Strike Commando, the sight of two shirtless no-necks butting heads and kicking each other in the balls, before Ransom punches him over a waterfall (yelling "Americanskiiiiii!!!" all the way down) and unleashing a primal "Whoaaaaaaaaaahhh!!!!!!!" Bruno's American cast is uniformly decent, as is Vitale, who Mattei clearly envisages as his own Richard Kiel (even down to Jakoda's ragged metal dentures!), and the Filipino regulars are also on parade - Juliet Lee, a Chinese-Filipino actress later in Bruno's Double Target (1987) and production manager on Claudio's Zombi 4: After Death (1988), is Jakoda's black-bereted VC crony who gets to kick the living Jesus out of Ransom; Jim Gaines Jr, his bright red headband recognizable through the chopper's windows at 200 metres, plays Radek's radio operator, and Michael Welborn makes a brief appearance as a GI. Followed by an in-name-only follow-up.
Posted by Unknown at 7:02 PM