Fortress In The Sun (Philippines action, 1975) 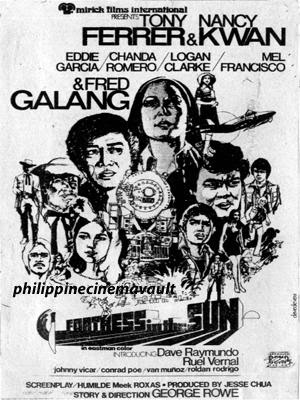 Heiress Maria (a beautifully matured Nancy Kwan) returns from overseas to her family's hacienda at Tierra del Fuego, where their sugar plantation's workers have been forced to choose between two evils: the sadistic treatment of her father Don Eduardo (Eddie Garcia at his sneering, domineering best), or the bandit Torrente (Mel Francisco) and his scorched earth policy against the sugar baron. Into the hacienda come two strangers, the undercover cop Tony (former "James Bond of the Philippines" and karatista Tony Ferrer) who in the line of duty falls in love with the kind-hearted reformer Maria, and the mysterious kung fu expert Alan Lee (Ruel Vernal), worming his way as personal bodyguard into Don Eduardo's confidence. An action-drama with a social conscience, this competent Mirick Films export title directed by George Rowe - Ferrer's director on a number of 60s Agent X44 films - is punctuated with fistfights, kung fu brawls, and explosive combat scenes as the hacienda becomes a battlefield pitting boss against workers and sex-crazed bandidos, and a fantastic supporting cast - Fred Galang and Chanda Romero playing sibling worker activists, American actor Logan Clarke as Don Eduardo's equally sadistic henchman Rico, and Conrad (half-brother of FPJ) Poe as one of Don Eduardo's sons.
Posted by Unknown at 5:09 PM