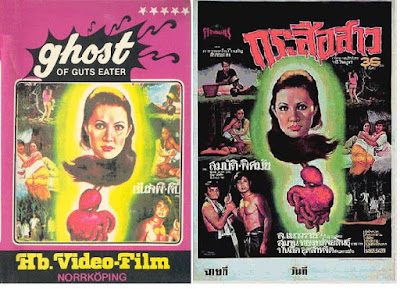 Welcome to the lurid universe of pulpy Thai horrors, and our rarer-than-rare krasue film Ghost Of Guts Eater.

This is a film that definitely needs some context. The krasue is a peculiar South East Asian variation of the vampire myth, believed to be Hindu or Buddhist in origin, and takes the form of a curse or case of demonic possession. The difference is that head detaches itself from the body and flies off looking for food, carrying with it the oesophagus, stomach and intestines. In Indonesia it's known as the Leak, in Cambodia the Ap, Phi-Kasu in Laos and in Malay as the Penanggalan. As with western vampires the krasue hunts for blood or flesh at night - although in Asia it favours new born babies and their placenta. The flying head may also be trapped by thorns, and must return to its resting place - or in the krasue's case the neck! - before cock crows.

"Witch With Flying Head" films are a staple of Asian horror, particularly in Thai cinema, and Ghost Of Guts Eater from 1973 is the earliest surviving example. Ghost... doesn't waste any time opening, maybe not kicking but certainly screaming, with a flying witch on the loose in the chicken house of a tiny Thai hamlet. Yes, there it is: the detached head with guts a'flying, surrounded by what looks like a flashing police light, making it a somewhat easy target for the villagers trying to whack it like an unstable pinata. Fatally wounded, the head rejoins the witch's body, but not before she passes the curse to her only relative, her glamorous granddaughter Bua Klee, via her precious ring.

Time passes, and Bua Klee marries sweetheart Boon Muang (that's Thai superstar Sombat Metanee). They settle into domestic bliss, except for Grandmother Chim's voice from beyond the grave reminding her she's hungry for blood. Suddenly - the new blushing bride completely loses her head. One aborted trip to a couple's placenta chest later, the village accuse her of witchcraft, and the couple plus best friend move to his Uncle Moedy's village to start a new life. And at this point, my friends, things get really weird.

On one level, Ghost Of Guts Eater is a touching melodrama, and a neat slice of rural life. There are soap operatics, some gentle humour, and is for all intents good solid populist pulp, showing a sophisticated level of filmmaking technique. Then there are the love potions, jealous screaming harpies, giants guarding treasure, a half-naked wizard with a messiah complex, and a second flying head from a rival witch. Picture this: one flying head biting the other on the intestines. "She bit me in the ass!" the second head complains without a trace of irony or potty humour. If this doesn't make your head spin off your own neck, then you're already dead. I swear, it's movie moments like this I feel glad to be alive.

If you're new to this South East Asian madness, I welcome you to our humble abode. Sit comfortably cross-legged on the bamboo mat and pour yourself a steaming bowl of Ghost Of Guts Eater.