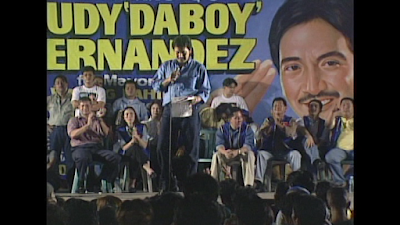 
Miguel: I know we have talked about this on the podcast, but since this is a new venue for your second Filipino film doc in the same number of years, talk about your love affair with Pinoy cinema.

Andrew: Jesus, Miguel, where do we begin? I suspect it started way back in the late Seventies, when Betamax started throwing up some of the weirder, more obscure genre titles, and without me knowing it at the time, many of them happened to to be filmed in the Philippines by Filipinos. Later came Apocalypse Now and Platoon, and a conscious notion of watching a film actually shot in this (for me) almost mythical landscape of the Philippines – and then For Y’ur Height Only, starring a two foot nine Filipino James Bond, and suddenly the dots started to join together! After seeing Weng Weng in action, I started to to recognize his co-stars in other kung fu movies, and the names Bobby A. Suarez and Eddie Romero and Cirio H. Santiago appeared everywhere on my peripheral vision. Twenty years later and I’m watching everything from Filipino arthouse, indies, vintage musicals, lowbrow comedies, costume classics, Mad Max ripoffs, parodies, superhero movies...it just doesn’t stop. The obsession is well and truly out of control. And not only do I make movies about their film history and write about it (The Search For Weng Weng book is only months away from release), I’m also teaching that history to Filipino kids at universities. It all started with Weng Weng, and I can’t imagine the journey ever ending!

Miguel: Anecdotally, I know more than a few people know who Weng Weng is specifically because of your documentary The Search for Weng Weng. Do you think the same thing will happen for Rudy “Daboy” Fernandez? What made you choose him as your next subject?

Andrew: It was more a case of Rudy finding us! Dani (Palisa, The Search For Weng Weng’s co-writer/co-producer) and I were busy pitching a different project altogether in Manila at the time, a documentary on erotic cinema under the Marcos family. As Imelda’s son BongBong was beginning his campaign for Vice President, we were told quietly that now was not a good time to be talking porn and dictators, and I suspect they were right. Instead I received a Facebook message from Rudy’s son Rap - “If you’re not busy, can you make a film about my dad?” - and so began a manic seven months from that message to an opening night at Q-Cinema film festival premiere in Manila, complete with an actual Red Carpet, celebrities and paparazzi! Rap wanted a tribute during the seventh year of Rudy’s passing, and because Rudy is still adored – I mean, really worshipped, like the Philippines’ King of Action before him, Fernando Poe Jr – the film hits a chord with its Filipino audience. Rudy is very much a part of the nation’s DNA, and there’s a sadness over his untimely death that seems will never go away. It’s impossible for those layers of meaning to be transferred to an audience outside the Philippines, which probably makes this film more for a local audience than an international one. But I do think the story of Rudy’s personal trials and tribulations, as well as the history of action films in the Philippines, and the need for an action hero in the lives of those who have no voice, is a universal one. There’s no irresistible hook of a two foot nine James Bond, so you have to be realistic - I can’t imagine the film travelling as far as Weng Weng, but hopefully it will find its audience. 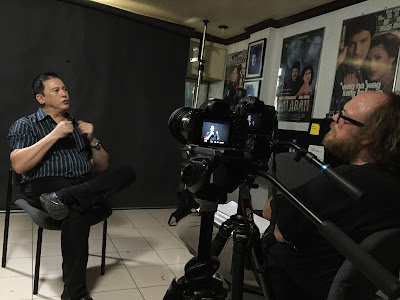 Miguel: The Last Pinoy Action King is quite different in tone and structure from your last doc. What did you know going into making this documentary after your previous experiences? Was there anything specific that dictated the feel of this documentary?

Andrew: Last Pinoy… is most definitely a more conventional talking-heads documentary, much more linear and chronologically structured. First and foremost I wanted the film to be about Rudy, his family, his extended clan of co-workers, and the film culture from which they sprang. It couldn’t be another “personal journey” film, so Dani and I immediately took back seats and let the subjects do the narrating. And because Rudy had obsessively archived his and his wife Lorna’s careers in a four storey building in Quezon City, we literally had a mountain of material to piece the film together with – home movies, photos, posters, clippings, and more than a hundred feature films and TV shows. Once the fifty interviews were filmed, our editing team under Lawrence Ang pieced the film together as if it were an archaeological dig! The other factor to keep in mind was its Filipino audience. Rap wanted to sell the project to local TV, and you really can’t be too experimental for a TV audience in the Philippines. So we tried to tell Rudy’s story along with the bigger picture concepts in an uncomplicated fashion. I have a feeling that the next doco will be radically different again, and yet thematically will form a perfect trilogy on Philippine cinema history. 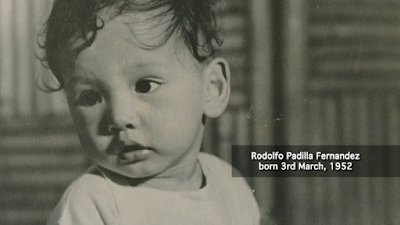 Miguel: Do you think it is an inevitability that the exploitative nature of film industries (Hollywood just being on such industry) will lead to sad endings for many of our film heroes?

Andrew: For the little guys like Weng Weng, definitely. And in a Philippines context, the yawning chasm between the haves and the have-nots is immense. Rudy’s story, however, is markedly different to Weng Weng’s. He was born into film royalty and a political dynasty, and despite his father’s failing fortunes towards the end of his life, he was able to become a superstar and remain so until his early passing from cancer. One of the incredible things about Rudy’s life, I think, is that he gave so much of himself and his wealth to those less fortunate around him, in stark contrast to the majority of local producers who DID exploit the little guys – figuratively or literally, in the case of Weng Weng. Ultimately, Rudy’s story is one of a real life hero, much like his own hero and mentor, Fernando Poe Jr. Hence the title The Last Pinoy Action King – if FPJ was the Action King, then Rudy would have been his logical heir if he’d survived and the action genre hadn’t died with him.

Miguel: Do you think there is still some push back from the Filipino community about bringing attention to the genre cinema of the Philippines? How do you overcome the perception that people enjoy these films sincerely, rather than pejoratively?

Andrew: In the Philippines, “genre” will always be a dirty word in certain circles. It’s changing slowly – when I started delivering university lectures on Pinoy B films in 2008, you could hear the snorts of derision! Last year the crowds were bigger and the snorting less obvious. It’s the KIDS who are embracing their past glories and action heroes, and to them, “genre” - specifically, action, horror and exploitation - means a world of opportunity (see Erik Matti’s global success with On The Job [2014]). Sadly the Cool Kids haven’t embraced Rudy as a cultural hero in the same way they did Weng Weng. I guess Rudy is less of an underdog, more representative to them of the Superstar Machine, and I can see where they’re coming from. As an outsider I don’t have the same cultural baggage, and can appreciate Rudy’s films for what they are – well-acted, well-crafted if at times formulaic actioners.

Miguel: Do you firmly see yourself as a documentarian now? Would you ever attempt narrative film? Name some other topics you'd like to shine a light on.

Andrew: I think of myself first and foremost as a film obsessive; I watch them, write about them, research them, and filmmaking is a logical extension of that obsession, and documentaries are just one form of the filmmaking process. I’m happy to say Dani and I are finally prepping for that Marcos/porn doco, and we’re also shooting one on iconic Melbourne punk rocker/cartoonist Fred Negro (real name). But there’s an Aussie horror script I’m attached to right now as director, a gory throwback to early Eighties slashers, and Dani and I are writing a black, black horror-action-comedy called Parables Of Piss And Blood, to be directed by us in the Deeeeep South of the Philippines. Ideally I’d like to make one documentary, then one narrative feature. Narratives are fun to make and have greater audience appeal, but documentaries are lie jazz – there’s a free form to them, trying to capture lightning in a bottle, which I find exhilarating. 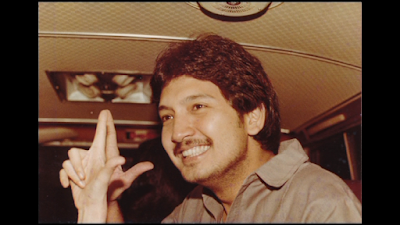 Miguel: Give readers a quick watch list for Daboy.

Andrew: Given the state of film preservation in the Philippines, general lack of subtitling and distribution on DVD, and Filipino cinema’s abysmal export record, it’s hard to see any of Daboy’s films, let alone be able to understand their Tagalog dialogue, outside of the Philippines. Back in the Eighties, when randomly selected Pinoy action films were being dubbed into English for overseas territories, several Rudy titles appeared on VHS - Operation Get Victor Corpus (1987), Raging Vendetta (1983), The Day They Robbed America (1985), all good solid gun actioners – and can be found on Ebay or torrent sites if you look hard enough. Some Tagalog ones pop up on Youtube from time to time, and if you can bribe a Filipino friend into translating for you, I’d recommend Somewhere (1984) with his wife Lorna Tolentino, the Hong Kong-inspired, hyper-violent Palaban (2000), the Shakespearian revenge thriller Pepeng Shotgun (1981), Danny Ziacita’s thinking man’s goon masterpiece Pretty Boy Segovia (1978), and the real-life gangster biopic that kickstarted his career, Baby Ama (1976). Rudy’s films exist in a whole other universe which takes a while getting used to, but once you do...watch out, the obsession could last a lifetime.
Posted by Unknown at 7:47 PM