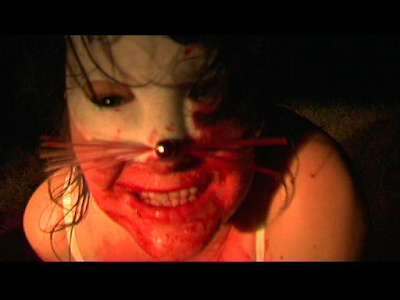 BLUEBIRDS OF PEACE AND DESTRUCTION

Andrew: The director of the Cinemanila Film Festival caught my BIFF seminar on Filipino genre films and invited me to do a repeat screening in Manila. How fucking cool is that? So I’m screening Filipino midget spy movies actually IN the Philippines. Plus I’m running amok with a video camera shooting a doco about my search for Weng Weng, the two-foot-nine Filipino James Bond. Hence the need to scrape together my possible bail bond.

Explain the concept behind Bluebirds Of Peace And Destruction - how does it differ from something like Lesbo-A-Go-Go?

Lesbo... was basically a straight-faced parody of 60s porn films, and I always wanted my next film to be radically different. With Bluebirds... I wedded the rules of Dogme and exploitation cinema, taking the basic story of the real-life West End vampire murder from 1989 as a starting point. Strangely enough, most people find the idea of recreating the Tracy Wiggington slaying at the original locations in such grotesquely poor taste, and that’s basically why I made it. Then you try to do something out of the box, so I watched a mountain of Godard, wrote the script as an improvisational piece, did a mad guerilla shoot over 48 hours with a 2-person crew, and stripped all the expected gothic and vampire imagery from the story, leaving visual clues to much older blood rituals. There’s no sex either - I figured if you’re on a serious death trip, bloodletting becomes a substitute for the orgasm. What happens after such a violent act is a sense of confusion and paranoia, and that’s what I try to get across - towards the end, the film literally starts falling to pieces.

How did you pick your actors?

The Trash casting couch - everyone around me is a born performer! Leisa and Starr (the two vampire leads) have been best friends for years and have such a volatile relationship with the outside world, I’ve known them for ages and always wanted to capture their unique chemistry on film. Chloe who plays the doe-eyed innocent caught in their spiralling paranoia, she’s a friend of mine who could portray a sense of detachment perfectly. As for you, my dear Jean - you were always my first choice for a petulant screaming prostitute.

Describe a regular day down at Trash Video... fill us in on a background, for the uninitiated...

It’s like Clerks but not Clerks 2, if you catch my drift.

What film projects have you got in the pipeline? Do I recall some talk about backyard cults and albinos?

My next script’s called “Happy Otter”, a Nietzchean incest rape-revenge thriller which I suspect may become THE unfilmable horror film. I can’t imagine anyone handing over quarter of a million clams to make a movie that’s destined to be banned in over 20 countries. There’s no albinos, but there is a dead fetus with lobster claws. Of course it makes perfect sense when you read the script.
Posted by Unknown at 10:36 PM