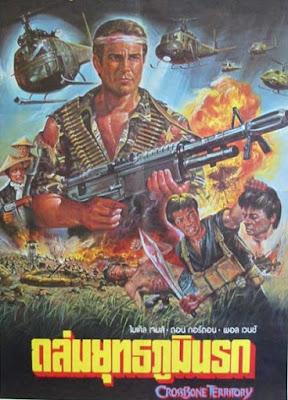 
[A Philippines production for the international market. Project started by Tessie Monteverde - daughter of Regal Films' Mother Lily - in 1983, filmed and released around 1985; released on Japanese VHS as “Omega Commando”, in West Germany as "Special Force U.S.A.", in Argentina as "Eliminator", and in Brazil as "Território de Sangue"] 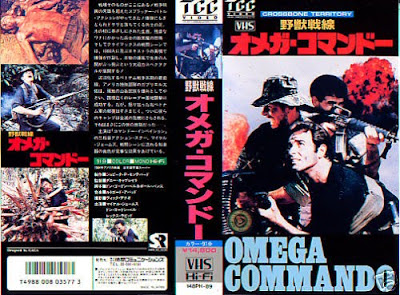 From Filipino company JPM Productions, the brainchild of Tessie Monteverde – as in daughter of Regal Films’ Mother Lily – comes an attempt to enter the export market via the well-trodden Ho Chi Minh Trail. Its bare-bones narrative charts a cross-border mission led by Captain Gabriel (Searchers Of The Voodoo Mountain’s Michael James) into VC-infected Laos to destroy a radar station, and the long march back to base camp through countless ambushes and bamboo traps while being pursued by a tenacious NVA Colonel (Philip Gamboa). Some negatives, like the same loop of native fucking flutes (!!!), are outweighed by the positives: an abominably high body count, beheadings, a belt of sliced ears, exploding limbs, and a tree groaning under the weight of its severed heads, all courtesy of the Philippines’ Godmother of Gore, Cecille Baun. This emphasis on brutal realism is hammered home by the presence of real world Marine Don Gordon Bell, playing Sgt Evans as well as co-writing and acting as “Technical Supervisor”, and ex-Navy Willy Williams as the jive-talking, Stones-listening Sgt Washington. Rounding out the team are Dutch-born Paul Vance (co-writer with Bell and “Bugsy” Dabao, and also in JPM’s bizarre 1984 post-apocalyptic Mad Warrior/Clash Of The Warlords) and Rex (brother of Lito) Lapid as leader of the Montagnards, cutting an impressively heroic figure throughout with a machine gun welded to his hand. In final analysis, director Cabreira seems a lot more comfortable with action scenes than dialogue, so it comes as a relief there are very few moments where M16s AREN’T chewing the living cud out of the Philippines’ jungles. 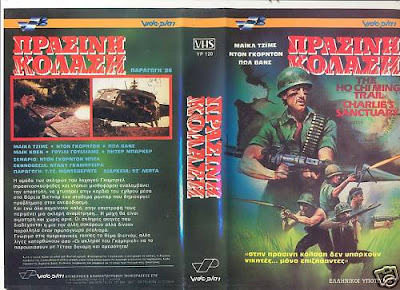 Nick Nicholson: Crossbone Territory was with Tessie Monteverde of JPM Productions. Bugsy Dabao, Paul Vance and I wrote the script, but we were stuck with Cinex on Firebird Conspiracy. This was back in 1983 and Don had just finished Stryker with Cirio and was brought into the project and ended up rewriting the script (which was terrible, since we were writing at Bugsy's brother, Vic Dabao's home in Santa Ana on Hollywood Street (of all places). LOL At the time Don was sharing an apartment with Michael James in Ermita, and even had a Burger and Chili Stand in front of Walt's "Cathouse" in Makati... After those projects were done we worked together on Kings Ransom aka The Destroyers with Cirio. 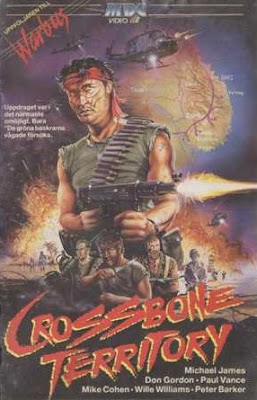 Don Gordon Bell: Tessie Monteverde of JPM Productions. I do remember that Bugsy asked me to work on changes on the script because you were on the EPIC Firebird Conspiracy that took FOREVER to finish. We did use REAL RATS caught from the hotel of a certain producer, I will not name...in the scene with Aussie Mike. He had the balls to let five rats lick "movie blood" Karo pancake syrup with #5 Red dye. Poor rats died from the red dye. The two girls that worked at the Burger and Chili stand took it over and did quite well, according to the Man himself, Nigel Hogge.

Yes, Paul and I worked on the screenplay together, with Bugsy Dabao. We were almost locked up in the hotel of Mr. Lim night and day for three weeks. During the day we worked on everything like uniforms, web gear, military supplies, insignia, props for both Viet Cong, North Vietnamese Army, Green Beret 'over the fence' or Special Observations Group team members. 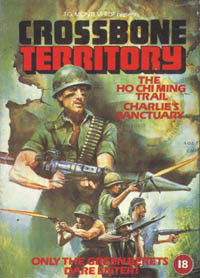 Bugsy taught us the how to figure the Production Breakdown of sequences and requirements for Daily Shooting Schedule, based on Sequences/set locations/Day or Night/special requirements, etc.

At night we would pound out the scenes with me manning the Corona manual typewriter. I went through three ribbons and many revisions. Actual shooting was done in under 7 weeks start to finish. Later I helped out on the rough cut with the director. It was a good film for the price Mr. Lim paid, AND we even convinced him to have "Smokeless" Squibs on the BODY HITS. That was progress.

I picked up a copy of Crossbone Territory recently and am gonna sell it at MMM formerly FFF next month. You want first dibs buddyman?