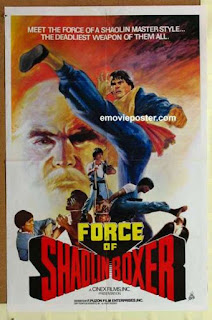 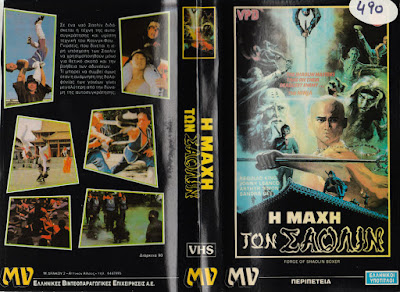 Cinex Films' export credits highlight shots of a cobra in the jaws of a frog, the powerful metaphor at the heart of the not-so-powerful kung fu feature Force Of The Shaolin Boxer, a product of martial arts specialist Rey Malonzo, also in the producer's and director's chairs, delivering a by-the-numbers goon-fu flick with generic action thrills and vague exotic touches. Malonzo plays Pei Fong - Pedro in the original Tagalog version - a slightly-built Shaolin Temple initiate known for his lightning speed, frog-like leaps and as a "crusader for Good". The night he's made a Golden Master (possibly your only chance to see a naked Malonzo in metallic paint), his mother is left for dead by evil cousin Cobra Po Chan (Taiwanese kung fu star John Chan), also the killer of Pei Fong's father, who steals not only the family fortune but Pei Fong's fiancé San Ling. Pei Fong sets out on an epic voyage to avenge his family and to rescue San Ling, a journey which finds him shipwrecked on an island ruled by a primitive tribe, and bound and marked for execution as a dreaded "outlander". The Great Chief's daughter Kalia takes pity on him and arranges his escape, but not before she becomes pregnant with his child; caught once more, Pei Fong manages to battle it out with Kalia's betrothed Lawin to secure his freedom, and if fate allows it, promises to return to her one day. Further along the road he inadvertently stumbles into a kung fu tournament, wins, and is taken in by fight promoter Lee Wong (comedian Don Pepot) as his new champion. Sure enough, Lee Wong's rival is the dreaded Cobra, and after tearing through Cobra's stable of fighters - Malonzo's battle to the death with a mean-looking, spike-gloved Danny Rojo in a warehouse-cum-funhouse is easily the film's highlight - he sets out to liberate both San Ling and the pregnant Kalia, and face off against Cobra: frog stealth versus snake venom. Recommended for goon fetishists and Malonzo completists only.
Posted by Unknown at 3:32 PM