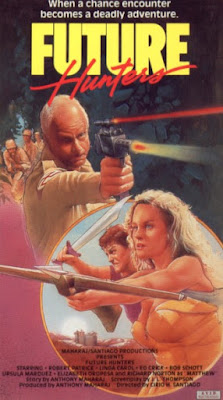 [US/Filipino/Trinidad co-production filmed in 1985 as "The Spear Of Destiny"; released as "Deadly Quest", in France as “Les Nouveaux Conquérants”, in Italy as "Eroi Del Futuro", and in Poland as "Mysliwi Z Przyszlosci"] 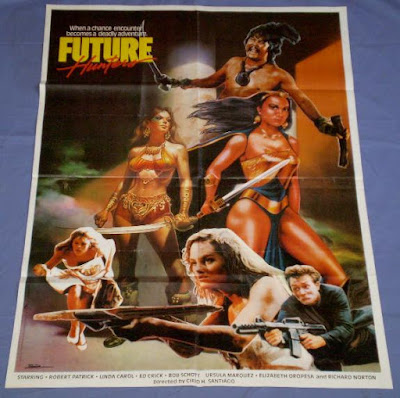 Cirio told me in our interview that his post-apocalypse feature Stryker (1983) held the fondest memories for him, and I can understand why. It's not just the first in a string of Road Warrior clones which, due to its phenomenal success overseas, brought Cirio back into the Corman fold. Moreso, it's the film which neatly divides his export career in two distinct phases, the Drive-In Years (from 1973's Savage to 1981's Firecracker) and the Direct-To-Video Years - a slight misnomer, since Corman was releasing some features to theatres as late as The Sisterhood (1988), but apt, since it was in the burgeoning Home Video market that Cirio would be at his most industrious. 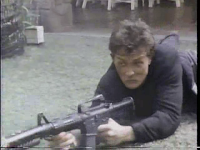 Cirio originally approached Corman to distribute Stryker, and for reasons only known to Roger, he turned it down. Instead, Cirio found an international sales agent, Trinidad-born distributor Anthony Maharaj, who managed to sell the film worldwide as a cost-effective alternative to the rampaging hordes of post-apocalypse films pouring out of Europe in the wake of Mad Max 2: The Road Warrior and Escape From New York (Cirio was delighted, if completely mystified, why Stryker would have a dream run in French cinemas for an entire year!). With the aspiring filmmaker Maharaj, a three-film partnership was born while Cirio was still reviving his association with Corman, all with Maharaj on producer and story duties: the urban actioner First Mission (1984), the I Spit On Your Grave-inspired Naked Vengeance (1985), and a film defies any single tag: a post-apocalypse, jungle action-adventure – with kung fu! - called Spear Of Destiny, later renamed Future Hunters (1986). 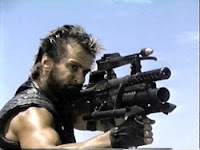 The film opens, appropriately enough, in a desert wasteland in 2025 AD, almost forty years after a global calamity has turned the Earth into wasteland. A lone warrior named Matthew (Richard Norton, complete with broad Australian accent) is pursued by an evil warlord named Zaar (David Light); both are after the prize, the Spear of Longinus, said to be the point that pierced the side of Christ while on the Cross, and once the spear head and shaft are reunited, so legend has it, gives the beholder its power to change the world's destiny. Thus, in the hands of those insane enough to wield it for personal gain (Hitler for one, or so the story goes), it can cause empires to fall. In Matthew's hands – and he is mankind's only hope, the narrator reminds us – it can turn back time. And it does – to 1986, moments before the global catastrophe is set to occur, and he stumbles from the temple into modern-day California carrying the Spear's point, just in time to save Michelle (Linda Carol), a young kewpie-doll anthropologist and her boyfriend Slade (Robert Patrick) from a gang of biker rapists. Slam! Matthew kicks into high gear, Whack! Down the bikers drop. Then Slunk! Matthew plunges the Spear head into one of the bikers and watches the guy melt into molasses. 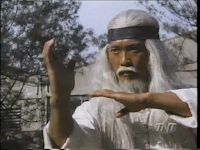 Sadly Norton's character checks out of the film early, expiring on Slade's back seat after warning them of the calamity to come, and begging them to find a scientist named Hightower. He's the expert at the local university on Spear of Longinus, but is currently MIA looking for a fabled Venus Valley somewhere in Southeast Asia. His assistant Fielding (Ed Crick) is more than interested in Michelle's artefact, and on the trail of Professor Hightower from California to Hong Kong they find themselves pursued by Fielding's henchmen, a jackbooted Aryan thug named Bauer (Bob Schott), random gunmen, lone assassins, and even the Triads. Even a low-key visit to a Hong Kong shrine ends in a kung fu showdown between the white-haired temple priest Silverfox (the ubiquitous martial arts actor Jang Lee Hwang) and their taxi driver, played by one of the Bruceploitation industry's busiest clones, Bruce Le! Everyone wants the spear, it seems, and none more than Fielding's neo-Nazi organization, who clench their fists and gibber ceaselessly about bringing on the “cleansing” fires of Armageddon. 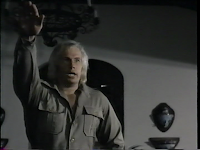 At this point the trail takes Michelle and Slade to the Philippines, where on one of its many islands it's rumoured the lost Venus Valley is located. Their tour guides? Cirio's old Stryker stand-by, an army of dwarf monks: the essential binding, it seems, with most Pinoy B films, but without the freakshow element we would expect; unlike Western culture, Filipino dwarves have less sinister or nightmarish connotations, and are regarded instead as innocent, pure, childlike or somehow magical. In Cirio's world, however, it's more like a nod to George Lucas' Sand People or Ewoks, and deliberately cued for yet another “what the...?” moment. From then on the film's like a Cirio pinball machine: from dwarves to Mongols, to Nazis, to Amazon Women, BACK to Nazis, and a finale where the Spear and Shaft are finally united in Jo Mari Avellana's elaborately threadbare Amazon village, but not before a fight with an awkward Michelle and an Amazon Huntress (Seventies starlet and “wet look” pioneer Eliabeth Oropesa) over a fire-lined crocodile pit. More explosions, an avalanche of plaster boulders, and we've just witnessed one nutty, NUTTY movie. 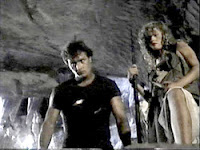 As Kathleen Turner and Michael Douglas stand-ins, Slade and Michelle are more a case of Romancing The Stoned; for one thing, they're already a couple long past the honeymoon stage who don't really seem to like each other, and while we never actually see them getting down to the dirty deed, there's certainly lots of pouting, nagging, and unnecessary post-coital (or NON-coital) lounging around in underwear. To be honest, if the Spear of Destiny is the glue keeping their relationship together, the planet's not the only thing that's doomed... Linda Carol is a cute lead, whether she's underplaying or overplaying her lines (she later faced off against Wendy O. Williams in the cheerful send-up of prison movies, Reform School Girls) whereas Robert Patrick, in only his second lead role (after Clark Henderson's Mexican drug wars film Warlords From Hell) looks completely bewildered at the events that brought him – and would return him three more times - to a Cirio set in the Philippines. Other noted Cirio alumni include Henry Strzalkowski as Bauer's right hand man – he gets a close-up fondling Linda Carol's trussed-up torso before delivering his single line “Shuddup” - dressed like a WW2 Japanese soldier alongside Eric Hahn and IFD regular Mike Abbott. An uncredited Nick Nicholson also appears briefly as a thug shooting at Slade and Michelle before his car bursts into flames, though I swear I saw him materialize later in a Japanese uniform.

There are several ways of looking at this magnificent mutant of a feature, a six-legged Frankenstein horse lumbering out of the Philippines' sand dunes with limbs of different colours and lengths. At first glance it's part Terminator, Raiders Of The Lost Ark and Romancing The Stone, with the Road Warrior scenario Cirio had already plundered for Stryker at the beginning and a little Bruceploitation thrown in for extra seasoning at the end of Act One. It's a grab-bag, and a desperate one, attempting to cover as many bases as its 100 minutes will allow AND YET amidst the madness it somehow holds itself together and is propelled forward by its own inane internal logic. If Cirio's later Road Warrior and Platoon clones are interchangeable, Future Hunters stands entirely on its own: ambitious, unapologetic and utterly preposterous, it represents Cirio at a playful, experimental, genre-splicing peak.