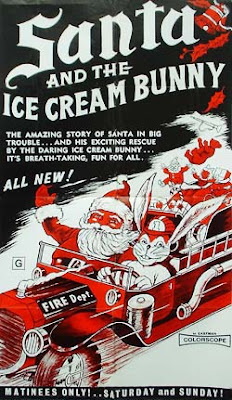 Santa And The Ice Cream Bunny 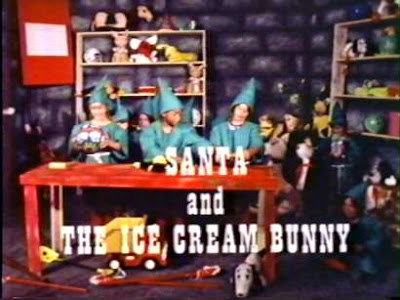 
Ladies and gentlemen, we have discovered the entrance to Hell, and it’s an amusement park in Florida. And it’s here we’re spending Boxing Day – and the end of the current season of Schlock Treatment – in the torturous sands of Santa And The Ice Cream Bunny (1972). You’d assume, in this season of giving, that we’ve saved the best of Schlock for last, right? Well, our film tonight is not so much a movie as a kind of wretched wrapping paper around a not-so-wretched short. In fact, Santa’s mulligan stew of school play, tacky home movie footage and amusement park advert, could be a new genre: the panto-mercial, of which its single entry Santa And The Ice Cream Bunny is clearly its outstanding example. To rub salt into our bleeding eyes, it displays a common trait amongst the kiddie matinee films, and that’s naked contempt for its audience, whom the filmmakers believe will watch any old horseshit, so long as there’s a candy cane parked in the top. [sound of crickets…] 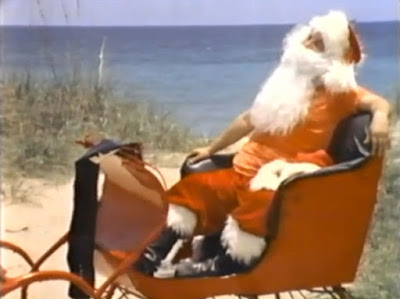 But hey kids, it’s Santa Claus! Wait…oh no! He’s stranded in the sand dunes of Florida and his sleigh is stuck without his reindeer. The kids from the neighbourhood heed his distress call, and empty what seems like the entire menagerie of a petting zoo to help pull the sleigh. There’s a cow, and a frightened sheep, a guy in a gorilla suit – this is all filmed, by the way, in excruciating detail – and even a donkey, but Santa’s clearly no Baby Jesus. Meanwhile, Tom Sawyer and Huckleberry Finn just happen to be floating down the Mississippi River (cue “Old Man River” on kazoos), and offer their angry raccoon from the safety of some bushes. From what we can gather from his litany of clichés, Santa’s frustrated with his lot, but the world’s children need their toys, greedy little selfish bastards that they are . Never give up, Santa tells the wilting kids, have faith and BELIEVE. And, since Santa’s footage is almost an hour short of feature length, here’s a story to hammer the point home… 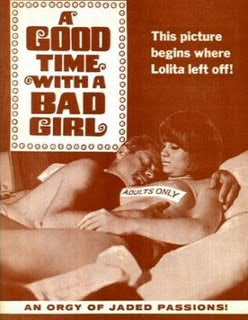 And so we arrive at our film-within-a-film, which comes with an interesting legacy. How did the director of A Good Time With A Bad Girl (1967) come to make kiddie horrors? Barry Mahon is one interesting cat. An American World War 2 fighter pilot shot down over Europe, his POW experience later inspired the Steve McQueen movie The Great Escape, but it’s his adventures in Filmland that most interest us here at Schlock HQ. By sheer twist of fate Mahon became Errol Flynn’s manager and directed his rancid swansong Assault Of The Cubal Rebel Girls (1959) which, along with the ill-fated Flynn vehicle William Tell, scuttled any chance at a serious career in Hollywood A-films. Instead, White Slavery (late 50s), a movie he shot in Tangiers while he and Flynn were laying low, sealed his fate, and he began a series of nudie cutie films, some with Playboy bunnies sourced by glamour photographer Bunny (“I shot Bettie Page”) Yeager. As the Sixties progressed, the benign nudie antics of Pagan Island (1960) and Girls On Tiger Reef (1965) gave way to notorious “roughies” like The Beast That Killed Women (1965) and The Sex Killer (1967), and then POOF! Like a third-rate magic act the pornographer disappeared, and Mahon the Kiddie Matinee King took his place: six shortish films in rapid succession around 1969 and 1970, and mostly shot at a doomed Florida amusement park called Pirate’s World, a place remembered more for its rowdy concerts by The Doors and Iron Butterfly than any of the buccaneer-themed rides. 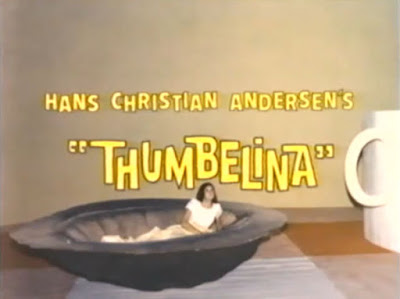 Thumbelina (1970) was Mahon’s cardboard rendition of the Hans Christian Andersen tale, a burnt-out fluro nightmare lit sparingly with dayglo splashes by a filmmaker who clearly didn’t have a clue what the word “psychedelic” meant. Its two inch heroine suffers all manner of ignomies – sleeping in a walnut, kidnapped by frogs, pimped by a widowed mole and railroaded into marrying her octogenarian neighbour – and all with customary good cheer and boundless optimism. Indeed, every human-sized creature, or man-sized anthropomorphic puppet with flapping yapping mouths, wants a piece of Thumbelina, or to at least feast on her innocence. That is, until a thawed out bird gives her a glimpse of freedom AND true happiness, prompting yet another ghastly unmusical musical number. It’s like the rock opera Hair before it hit puberty and was still high-pitched and hairless. Sure, Thumbelina is a step up in production values from the Santa footage, but when you’ve hit rock bottom, you’ve nowhere else to go. What ever you do, don’t drift off to sleep and let its hideous tune about “twelve pennies” soak into your brain-sponge. As Thumbelina draws to its depressing conclusion, it’s back to The Suck, and a sand-bound Santa still cursing his existential funk via a stream-of-consciousness gibberish issuing forth from his sweat-stained beard. I have absolutely no doubt there won’t be one single viewer left sitting by the end of the film, so I can safely give away the ending – Santa’s sleigh is saved by the Ice Cream Bunny, a pathetic seven foot threadbare creature even Jimmy Stewart in a percodin haze couldn’t have conjured. I can only assume it was the park’s mascot, as it drives the kids for a victory lap in a vintage fire engine past its numerous rides and attractions. It can perform only two functions, driving and winking like a dead, rotting, reanimated and fur-covered Marilyn Monroe. I swear, if anything screams Christmas more than the Ice Cream Bunny, I’ll happily choke on a homeless man’s sick, with the film’s “Jingle Bells” for kazoo playing as my funeral dirge. Happy Christmas everybody, and see you sometime in 2011 for the next season on Schlock Treatment as we leave you with the 1972 Santa And The Ice Cream Bunny. 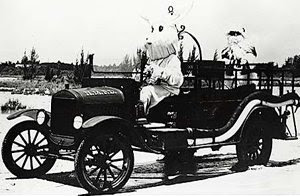