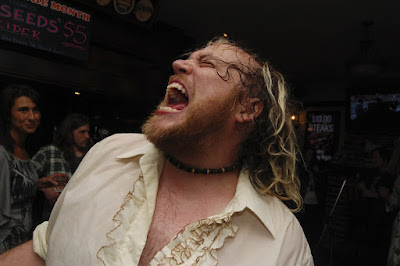 1993 to 1994 - INVISIBLE EMPIRE (drums) Later The Lost Domain, I was one of three drummers, including Bettina Graham and Ian Wadley

2003 to 2006 - THE AUSTRALIAN GG ALLIN SHOW (drums, vocals) Vaginabillies plus JJ Speedball doing a tribute to the most degenerate punk rocker of all time!

2001 to 2012 - THEY MIGHT BE NEGROES (drums) Fred Negro tribute band resurrected once a year with Fred on vocals and the Vaginabillies on the rest!

1994 – THE MALIGNANT ALL-STARS (drums) Improvised jam tribute to Monty Bloomfield, who had passed away several weeks before. With Cal Crilly (Queer), Greg Hilleard (Noose), Ian Wadley and David McKinnon (Invisible Empire) among others. Broadcast as a 4ZZZ Live To Air, Fortitude Valley 22/08/94